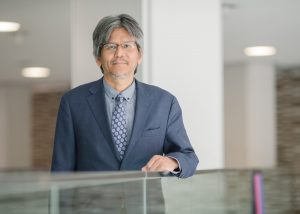 The primary cause of death in Japan is malignant tumors, meaning that discovering cures for cancers is recognized as an urgent task for the nation. Boron neutron capture therapy (BNCT) is one of the most promising cancer therapies known worldwide. Our laboratory is carrying out basic research on BNCT and is developing our own BNCT machine in the free electron laser (FEL) facility of Osaka University.

The principle of BNCT is as follows:

Boron-10 is accumulated in the tumor cells with boron agents such as borylphenylalanine and sodium mercaptoundecahydro-closo-dodecaborate, and neutrons are irradiated to the tumor to induce the next nuclear reaction:

The particles of helium and lithium produced via Eq. 1 can destroy the tumor. Therefore, if boron-10 is accumulated only in tumor cells, only the tumor cells will be killed. BNCT is known to be an excellent remedy among the various radiotherapies for cancers. However, it has not yet become a common cancer therapy. However, Japan is now leading the world in the research and development of BNCT. In fact, our laboratory is conducting studies on BNCT in terms of, for example, neutron source development with an accelerator, radiation measurement techniques for neutron source characterization, and a SPECT system to monitor the treatment effects in real time, which is known as BNCT-SPECT.

The photograph below is the neutron moderator assembly of our prototype BNCT machine. We brought it to Birmingham University in the United Kingdom in 2013 for a test operation. Protons incident on the lithium target from its upper side, and at the center, a large number of neutrons are produced via a p-Li reaction (p + 7Li → n + 7Be). Below the assembly, a space is retained for neutron irradiation. We set up a human phantom in the space to test the performance of the prototype system. From the series of experiments, we confirmed the validity of our BNCT machine. Now, we are designing a real BNCT machine that will be constructed at the FEL facility of Osaka University.

The fusion reactions shown in Eq. 2 occur in the sun to produce a large amount of energy.

This process is known as the “hydrogen cycle.” On Earth, however, it is very difficult to induce this reaction, because its probability is extremely small. Thus, we must employ the following reaction of deuterium and tritium nuclei:

This reaction produces not only energy but also a significant number of neutrons as by-products. While it is known that emitted neutrons pass easily through matter and can harm the human body, the neutrons can also transfer the released energy to the outside to produce electricity.

Tritium is a fusion reactor fuel that does not exist in nature but can be created via the following neutron nuclear reaction:

Understanding neutron behavior and control are key issues in realizing these fusion reactions. In our lab, which has its own DT neutron source (Osaka University Intense 14 MeV Neutron Source Facility (OKTAVIAN)) based on Eq. 3, various experimental and theoretical fusion neutronics studies have been conducted since 1980.

The figure bellow is an international thermonuclear experimental reactor  under construction in Cadarache, France, which is a so-called tokamak-type fusion reactor. It has a torus-shaped vacuum chamber, in which a mixture of deuterium and tritium is heated to a temperature of around 150 million °C to form hot plasma. Strong magnetic fields are used to keep the plasma away from the walls (to prevent the melting down of the wall). These fields are produced by superconducting coils surrounding the vessel and by an electric current driven through the plasma. In the vacuum chamber, a huge amount of energy is produced by the nuclear reaction shown in Eq. 3.

Basic studies on the interaction of radiation with matter

The studies conducted in our lab essentially concern radiation. In fact, we are currently focusing on all the possible applications of radiation in the industrial, engineering, and medical fields. To carry out these studies, we utilize various radiation-measuring techniques and radiation transport calculations. The radiation measurements include the measurement of radiation and its energy in terms of gamma rays, electrons, protons, α-particles, β-particles, and neutrons. We are also developing various measuring devices for different purposes. In these basic studies and those on BNCT and fusion reactors, the behavior of radiation in matter is very important and should be tracked through theoretical calculations. While, for charged particles, this is fairly straightforward, it is more difficult to perform transport calculations for non-charged particles, especially neutrons. Our lab is thus conducting theoretical particle transport studies for neutral particles using the Monte Carlo N-particle transport system and the particle and heavy ion transport code system.

To work hard is important. However, to continue working is more important. If you are interested in any of these research areas, please do not hesitate to contact me (murata@see.eng.osaka-u.ac.jp). You can also visit us in our laboratory any time.

I like variegated plants, such as that shown below. This is nothing more than a weed, an oxalis, which is very often seen on roadsides. In fact, while one might think this plant is very rare, this type of variegated leaf can be fairly easily found, if one looks for it carefully. This type of leaf is a so-called mutation, and its probability of appearing is, of course, very small. However, it is rather easy to find because there is a huge amount of plants growing around us. This topic is just a hobby for me, but I am studying why this type of variegated leaf appears and how we can enable it to fix and continue (the latter is known to be quite difficult).