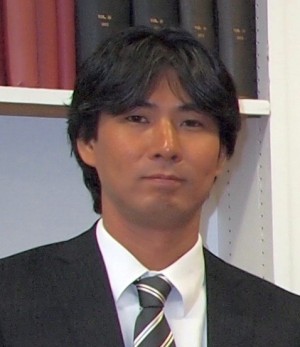 Development of safe and less invasive optical diagnosis and therapy 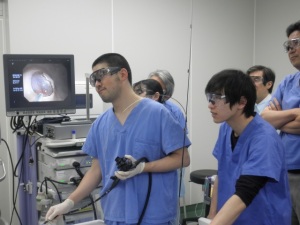 We are developing, in collaboration with medical doctors and manufacturers of medical devices, medical devices that use light, including a laser for safe diagnosis and therapy of various diseases such as cancer, benign prostatic hyperplasia, varicose veins, and gallstones. We are developing methods to quickly apply novel optical technologies to clinical diagnosis and therapy, using not only experimental evaluation but also molecular-level understanding of the mechanisms and computer simulation models for accurate estimation. For example, the photograph shows an animal experiment to evaluate a laser device for safe endoscopic treatment of early digestive cancers (e.g., esophagus, stomach, and colon cancers). In addition, it was recently found that cancer treatment using photodynamic therapy (PDT) can be performed not only with a laser, but also with a light-emitting diode (LED). A compact and low-cost device using an LED is very attractive as it would enable PDT to be more widely used in clinical treatment.

Using a laser, large labile molecules with molecular weights exceeding 10000  can be ionized without decomposition, and various molecules such as proteins and pharmaceutical drugs can be analyzed with mass spectrometry (MS). Biological samples are often analyzed by a combination of liquid chromatography (LC) and MS, because enormous numbers and types of molecules exist in biological samples. However, it is not possible to directly connect LC and MS, since laser ionization is usually performed in a vacuum chamber. Therefore, we are developing an atmospheric ionization technique using an infrared laser for high-throughput analysis of biological samples by directly connecting LC and MS. In addition, we are developing a molecular imaging technique by combining MS and microscopic imaging. Images of various molecules can be obtained simultaneously by separating the molecules according to their molecular weights. A device for cellular-scale, high-resolution MS imaging is also under development. 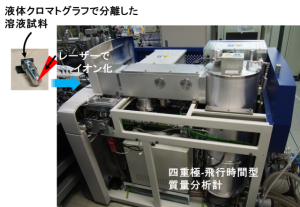 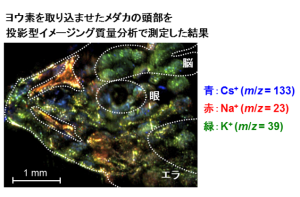